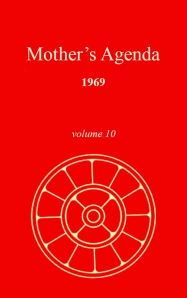 This time Mother has found the “passage,” what she calls the “new consciousness,” that which will open a new world to us, much as an amphibian created a new air by shattering for the first time the surface of the waters: “I don’t know what is happening; it’s a state of intense vibration, like lightning-fast waves, so fast that they seem motionless. And I go to America, I go to Europe… Never has this body been so happy; these cells, other cells – there was life everywhere, consciousness everywhere; all the other bodies were itself!” At the same time, all our physiological aches and pains vanish: “There is as if a dilation of the cells; limits dwindle, fade, then pains go away physically.” And this is not “another world,” it is the earth, our earth, but experienced in a different way: “It’s as if we had entered an unreal falsehood, and everything vanishes the moment we get out of it; it doesn’t exist! And all the artificial means of getting out, including nirvana, are worthless. SALVATION IS PHYSICAL! It is here, it is here. Everything else, including death, truly becomes a lie – there is no disappearance, no ‘life and death’!…” And while she breaks through the walls of our glass bowl, the whole world is in revolt, including the people around her, as if under the pressure of a new air: “A huge number of desires that it [Mother’s body] die, everywhere, they are everywhere! … The whole gamut, from the worries in people around me, the longings for a quick end, to the restless desires: free at last! … I would like not to be put in a box; the cells are conscious… What is going to happen? I don’t know. This defies every habit.” A new species very much defies the world’s old habit. Will the world accept her, or will it ultimately remove her?